"To be called a hero, I don't think I am. I'm just a guy who did my job, did my job to the best of my ability and didn't do anything different that anyone else would do," said Bain, who received the 2015 Helping Hands For Freedom Wounded Warrior of the Year honor.

Born at Marine Corps Base Camp Pendleton in California, Bain grew up hearing stories of how every male in his family served in the military.

"My dad was a Marine. My dad educated me and said don't be a Marine just because I am a Marine and to pick the branch I wanted. I researched the Army and Marines," said Bain.

When the time came to make a decision, Bain said it came down to a simple question.

"I had both the Army and Marines recruiters sitting there and I asked them both one question that helped me make my decision. I asked them if I didn't like my career choice, could I change it. The Marines recruiter said no. The Army recruiter said I could put in a request, and I liked his answer and went with the Army. I tell people all the time when I was born, I was one of "the few and the proud," and when it came time to serve, I wanted to "be all I could be,"" Bain said.

In 192, Bain enlisted in the U.S. Army and was sent to Somalia, where he was there during Black Hawk Down. From there, he spent six months in Egypt, but it was Iraq in 2004 that changed his military career and life.

And, it is where the distinction of "hero" comes from.

"That was the best and worst day in Iraq," he said.

That night, Bain got the okay to embark on a raid in Taji.

"We jumped out and got ambushed. My interpreter set me up. The puff of smoke went up and we got hit with mortars from all over. I got my guys under cover and ran back to where we were set up. I got shot in the arm, elbow and other places," said Bain, who lost four-and-a-half pints of blood, was dead on the battlefield for 18 minutes, endured 18 surgeries and has an electronic battery pack embedded in his buttocks to send an electrical charge to the left side of his body.

While recovering at Walter Reed, Bain made a decision that he would spend the rest of his helping fellow veterans.

"I decided I would do whatever it took to help my brothers and sisters in uniform. I made it a point to say I would never walk past a veteran without doing something. I have an understanding that He spared my life because He knows I'd never let anyone hurt my brothers and sisters. I have a voice that will be heard. I'm blessed. I have my family and my health. Others are not as fortunate," said Bain, who received a Purple Heart and Silver Star for his service. 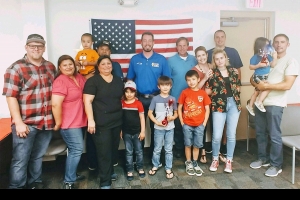 April 30, 2019 - HHFF met their new NASCAR hero in Kyle Busch. Co-founder Rod Smith and Billy Crafton, a financial adviser to professional athletes, organized a meeting with Kyle Busch to show his support of our Gold Star and Survivor families at the Arizona National Guard base.