September 19, 2013 – High school students came together to help raise money for military children of the fallen, wounded and deployed. Covenant Christian and Danville, both with mascots that are Warriors, felt inspired to live up to their name and honor those who sacrifice for our country. Head Coach, Rob Zajdel, led the charge and felt that there was no better way to thank our Military Heroes then to do a Warrior vs. Warrior game to pay tribute to those who sacrifice so much for our country's freedom. Teams wore camouflage uniforms, including the coaches, with all the proceeds for the evening going to Helping Hands for Freedom. Recently appointed Chairman of the Board, David Roth, helped make sure this very special evening was a huge success. Co-founder, SSG Patrick Shannon, addressed the crowd and thanked everyone for their support.

October 5, 2013 – HHFF was excited to be a part of paying tribute to Trooper Bartram who was an Indiana State Trooper killed in the line of duty. The observation ride is designed to recognize his contribution as an officer, son and family man with the proceeds benefiting military children of the fallen, wounded and deployed. The Observation Ride and Poker Run took place on the back roads of Morgan County and finished with a Pig Roast and Live Band to pay tribute to Trooper Bartram

October 12, 2013 – Flashbacks Family Bar & Grill broke out the premier event of the fall season, The First Annual Cornhole Tournament benefiting Helping Hands for Freedom. The tournament featured cash prizes to the top teams, quality raffle items, great food and entertainment presented by everyone at Flashbacks. We would like to thank cofounder SSG Patrick Shannon and Chairman David Roth for their dedication to our fallen military families. We were able to make several new contacts, provide holiday assistance for three families, and bring the patriot riders, our wounded warriors, and Helping Hands for Freedom together for a fun filled day. Flashbacks provided food and beverages for all the guests. The patriot riders presented HHFF with a $1,500 donation. Our heartfelt thanks for the volunteers and everyone else involved that made this day possible.

This year's Notre Dame vs. USC game had special meaning to our first responders

October 19, 2013 – Special thanks to the non-profit organization, 9/11 Fund and the FDNY Fire Family Transport Foundation for hosting the Warriors Game at Notre Dame in South Bend, Indiana. On this very special Saturday, Notre Dame beat USC while first responders come together from all over the country to honor our Nations Warriors by raising money to support military children of the fallen, wounded and deployed through Helping Hands for Freedom. Chairman of the Board, David Roth, and co-founder, SSG Patrick Shannon and CEO Darin Fishburn were all on hand to greet the great fans and distribute T-shirts recognizing the traditional game of these two great college football programs. HHFF cherishes their Partnership with the 9/11 Fund, FDNY Fire Family Transport Foundation. A special thanks to the Heroes to Hometowns nonprofit organization for providing tickets and for their support of this amazing weekend of fun and intense competition. 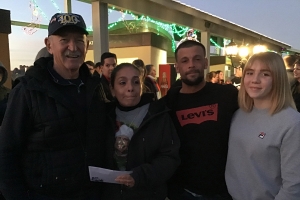